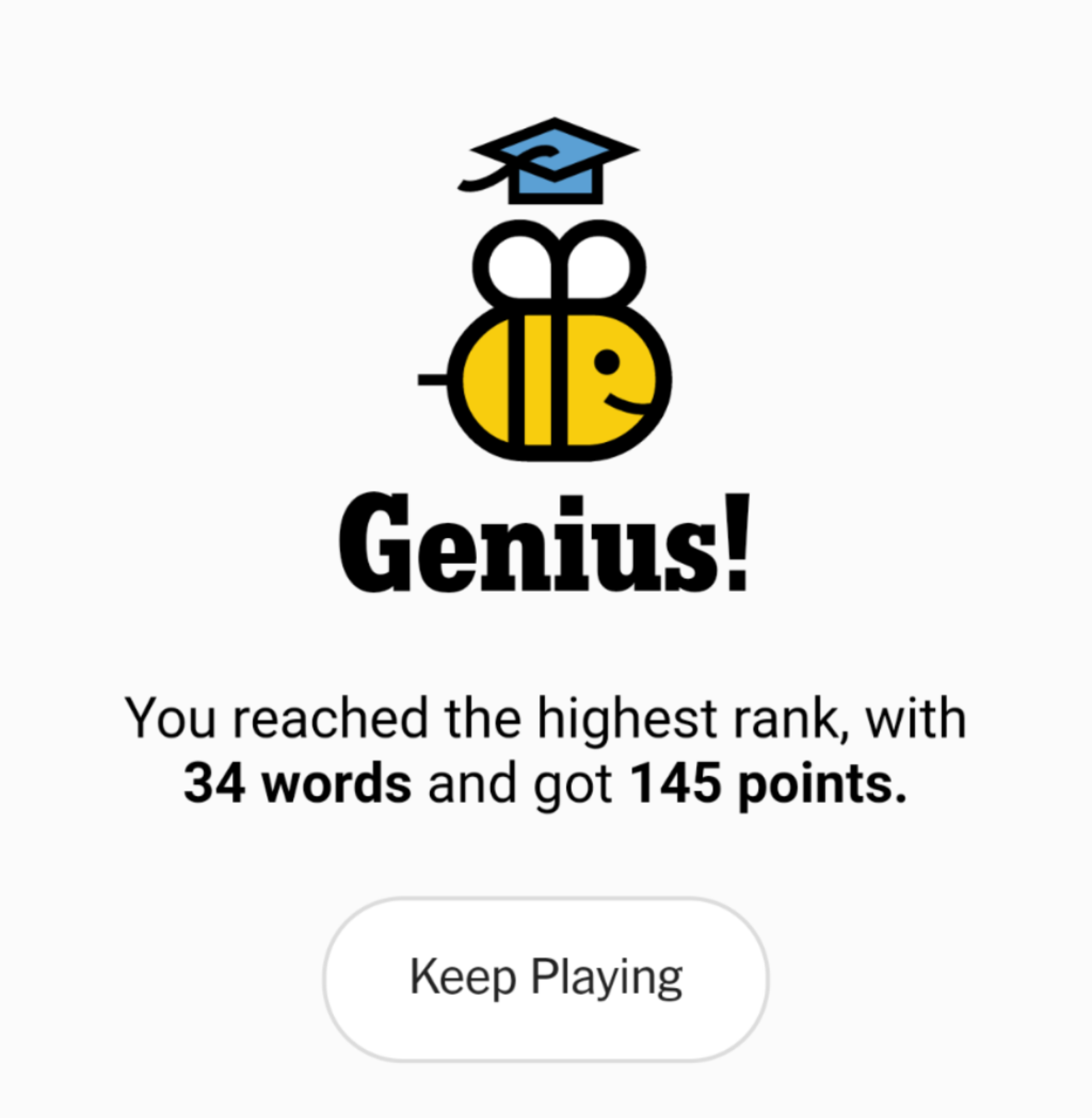 I made it to genius tonight after working on it throughout the day.

I missed just three words yesterday, and I wouldn’t have gotten those without brute forcing the puzzle.

CHOKY: I can’t believe this actually a word. But it is, and it’s the adjective form of CHOKE. Like what can happen with a three-foot putt.
CIRRI: A bunch of cirrus clouds.

ICHOR: The blood of the Greek gods. Here’s a related interesting read from Stanford.

Final score as I quit for the day: 34 words for 145 points, four points in excess of the genius minimum. Probably well short of the maximum. 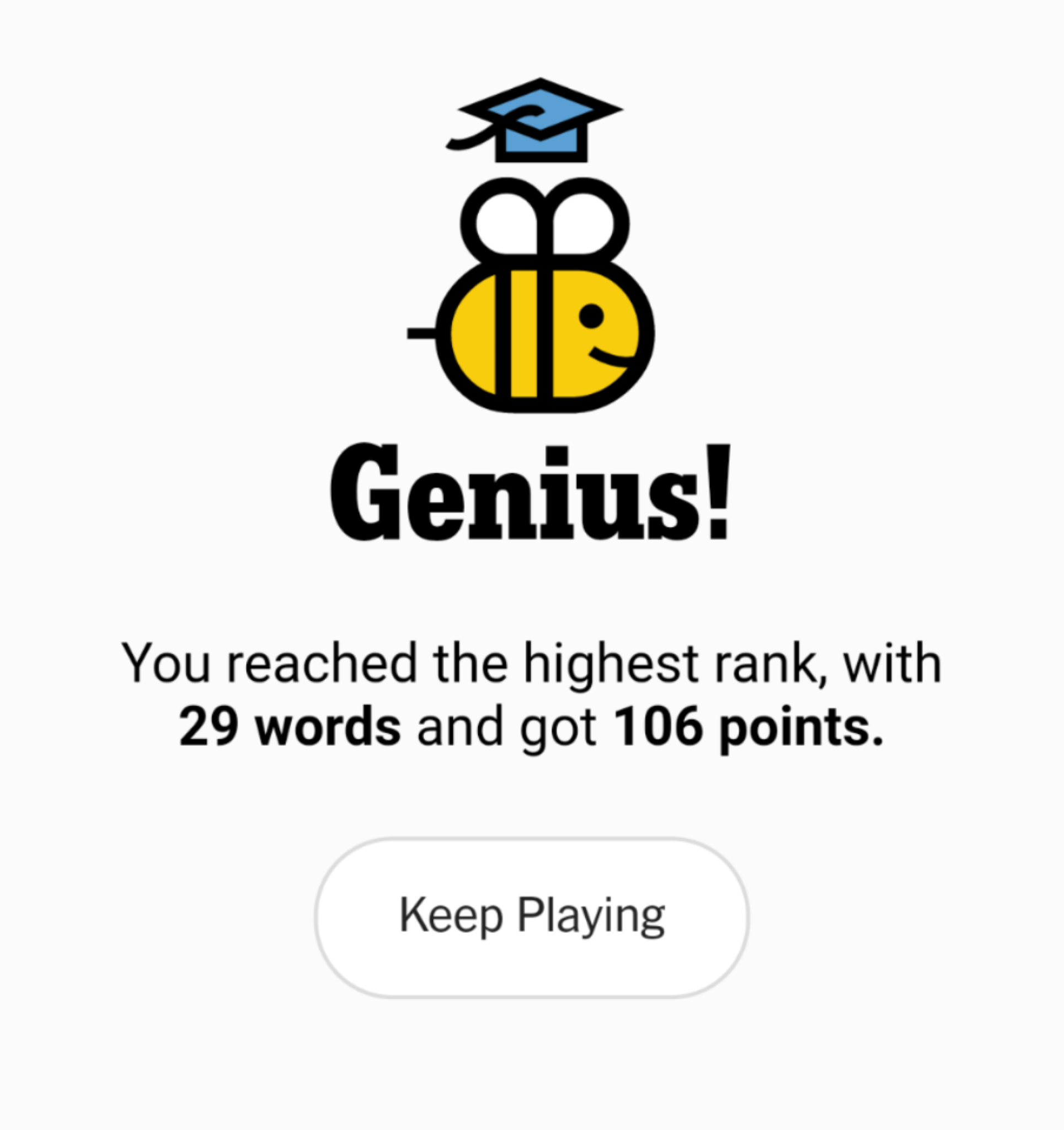 I feel like there’s a chance that I can go beyond where I am now in today’s puzzle, but since the debates are coming up soon, here’s my analysis of yesterday’s misses:

EDDIED: past tense verb form of the whirlpooling. Should I have gotten this one? Meh. I wouldn’t have thought of it.
ENNUI: My mind didn’t go there, and I’m bummed about that.
INDIE: I probably should have gotten this.
INNIE: This one, too.
NINEPIN: A substantially worse form of bowling.
PINNIPED: The clade that includes seals and walruses (walri?). I’d never heard this before, and I don’t know if I’ll remember it, but now I know a new thing.
PINUP: Oh well.

So it wasn’t so bad last night, but there certainly were words I missed.

Current (and possibly final) score: 29 words for 106 points with minimum genius at 85. 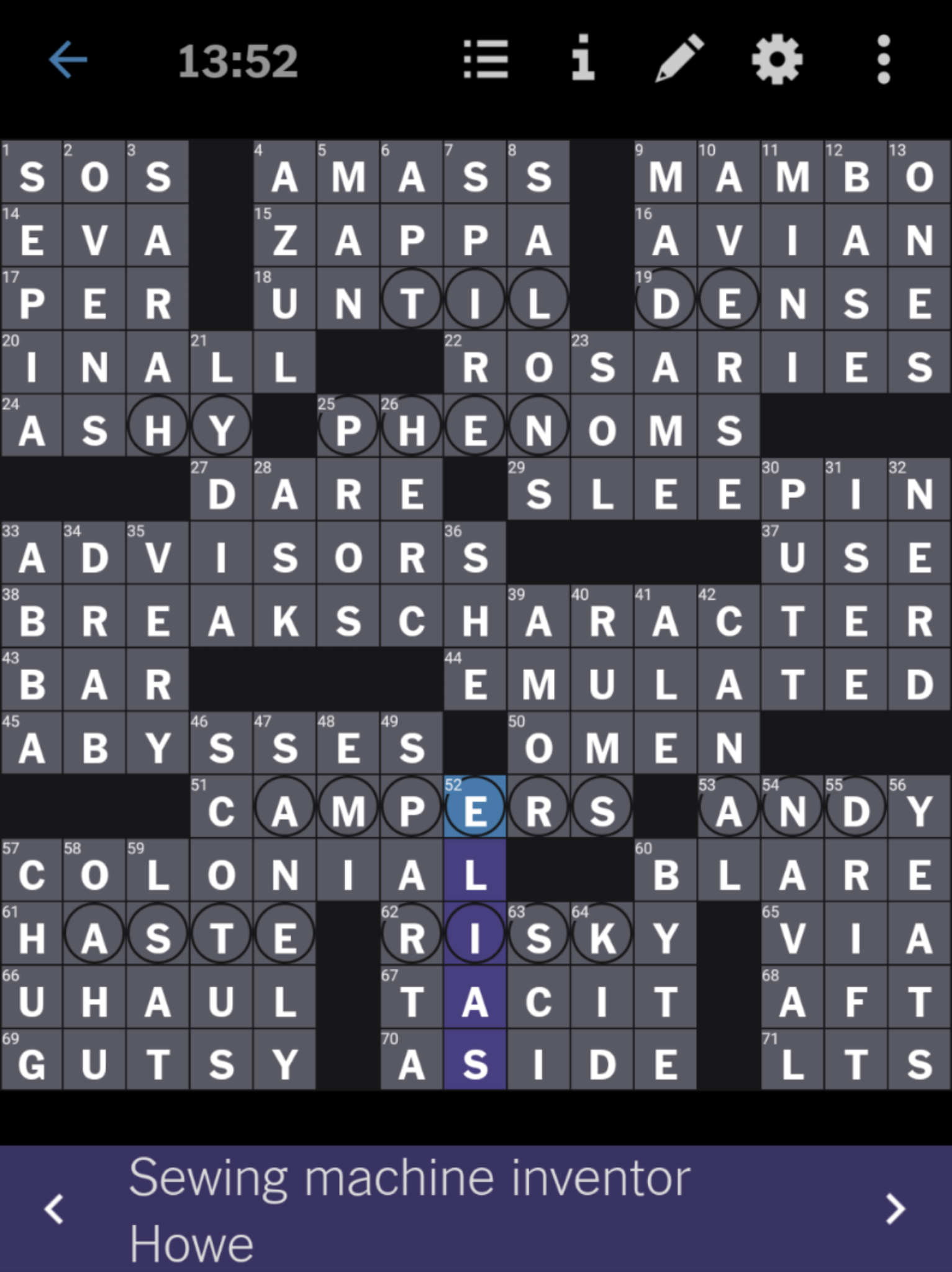 I can’t sleep, so I’m writing this post from bed. I know I haven’t done a crossword post in a while, but that doesn’t mean I’ve not been doing the puzzles. I’ve been doing the Monday puzzle for two dozen weeks in a row, and the Tuesday streak for half that. I ran out of time a few months ago because I’d forgotten about it until well into remote board games with my friends and couldn’t break away.

This puzzle had a typography theme:

61A Something to make in an emergency? + 62A having low odds of success: H(ASTE|RISK)Y *

Two things I find interesting to point out in this puzzle.

The first is the history of ampersand. While this is a good detailed history from the OED, the summary is that the symbol is a combined et, the name ampersand is a screwed-up version of and [referring to &] per se and. So & is itself and. It also used to be the 27th letter, so there’s that, too.

To go one step further along these lines, I went to the Getty Villa with my family back in February, and I saw “&c.” in some old writings. That turned out to be an even shorter version of et cetera. It makes sense: etc.=et+c, and et=&, so et cetera=etc.=&c.

The other thing worth mentioning is 52D Sewing machine inventor Howe: ELIAS.

Our government explains Elias Howe’s invention in an adorable, dated site likely geared toward children. I know it’s not intended to educate Trump because his name doesn’t appear every so often.

Essentially, Elias Howe made a sewing machine, but it kinda sucked. Isaac Singer and Allen Wilson made it good. Nobody’s heard of Elias Howe, but everyone knows Singer sewing machines 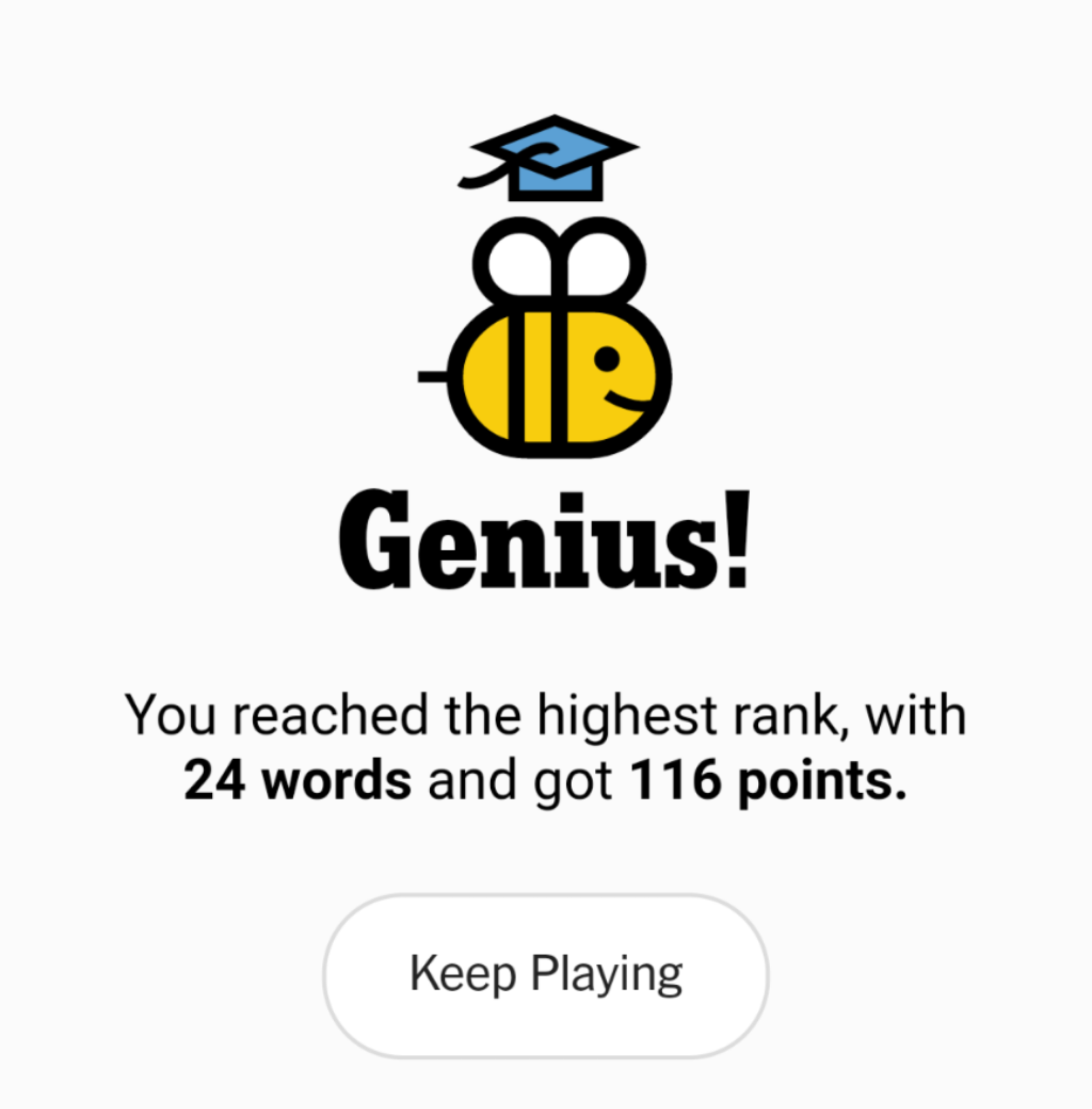 OK so I made it through the entire fast of Yom Kippur. More than 25 hours with no food and no water. Got to the Spelling Bee about an hour and a half ago, but my mind has been elsewhere as I recover (and as my fiancee bears with me as I recover).

I keep having to remember to drink water. But I’d been actively avoiding it, so now :/.

I got to genius level tonight and decided to quit. But yesterday I missed a bunch, and now it’s time to find out what was dumb, what was reasonable, and what was outrageous.

ADOBO: Apparently the unofficial dish of the Philippines. I will find out if friends of mine agree. Please tell me if you have info in this area, too.
BALLADRY: Not unreasonably, my first read of this word made me think it had to do with a necessary move after a shower, but on second glance, clearly it’s a collection of ballads. I did not know this word before, now I ought to remember it from the giggling.
BALLYARD: I have NEVER heard this word before. It’s a synonym of ballpark. Ballpark does not have a red squiggly under it, but ballyard does. This rates as a triple-frownie on the reasonable-Will Shortz scale.
BAOBAB: We’re back to trees I hadn’t heard of! But I don’t even know what to do with myself after seeing what this one looks like.

BODYBOARD: I had one of these growing up. I think it’s still in the garage. Now I miss the beach. Stupid covid.
BYROAD: I just don’t use this word. I say side street like a normal human being.
LARBOARD: it means port. Not starboard.
LOBLOLLY: Sounds too much like Bob Loblaw’s Law Blog, but it turns out it’s yet another tree I hadn’t known existed.
ROLLBAR: I probably should have gotten this one, but I don’t fault myself for omitting it. 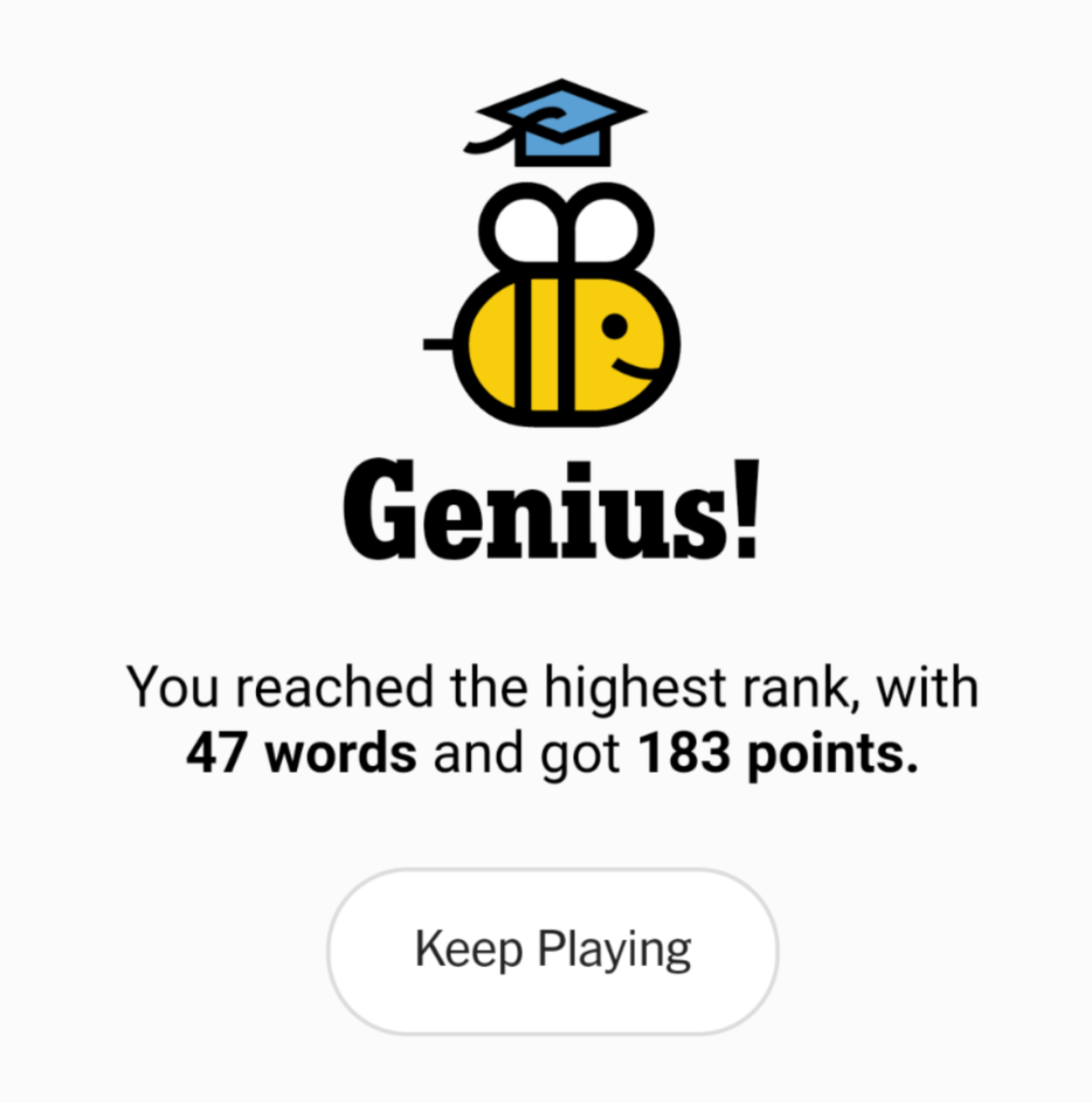 I thought I wouldn’t get this done before Yom Kippur started, but I have!

It was a long puzzle, and I found two anagrams. There may have been more.

Yesterday’s misses:
AEON: Just a stupid way of spelling EON. Ridiculous.
AGELONG: Shorter than an AEON, but also longer than AEON.
GALLEON: I missed this? That’s some ship!
GALLON: Embarrassed.
GONNA: Sad.
LLANO: I’m learning all kinds of botany from this game. That’s plain to see.
LOAN: Ugh.
LOLLYGAG: Pretty sure I’ve missed this before, which is a shame because it means dillydally–the point of this game.
LOYAL: My financee is going to give me some real side-eye when she reads this part of the post.
LOYALLY: Again.
NEON: Or she’ll take the noble position and let it slide.
NYLON: Sheer error.
OENOLOGY: Sure, wine not?
OGEE: It’s a good counter point.
ONLAY: A dental thing you can read about here that I don’t care to because dental things make me cringe.
OOLONG: I don’t care for tea, and that’s a good thing because tea prices are rising like crazy right now.

Wow, that’s a lot of missed words. So many chances to make it to genius level. 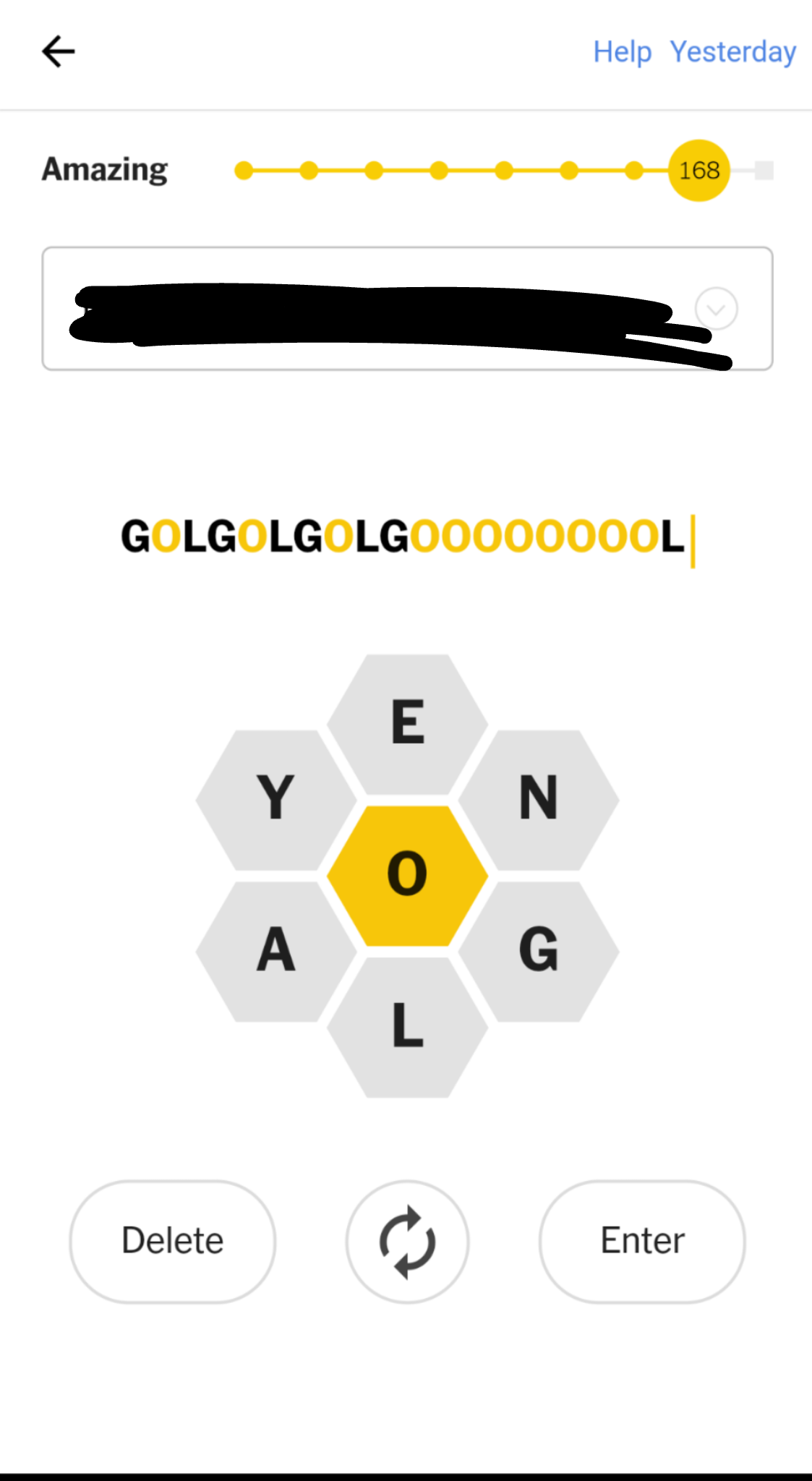 I just cannot seem to push this one over the edge, so it looks like I’ll fall short of genius tonight.

I’m irritated more than ever by an omission: NEOLOGY. You know, making new words–the thing we all do when we play the NYT Spelling Bee. If enough of mine had worked tonight, I would have gotten to genius level. Too bad I’m not that convincing.

Yesterday’s misses by me were few.

COOLDOWN: I’ve just learned that this is a compound word.
ENOW: It means enough? This ranks a double-AYFKM on the reasonable-to-Will-Shortz scale.
LOCOWEED: A plant that is super bad times for farmers to the tune of $300 MILLION A YEAR. For animals, it starts out kinda just growing there that makes it worth chewing at, but then they develop a taste for it. Then it kills them. Bummer.
WEDDED: I’m going to get some grief from my fiancee for missing this one. 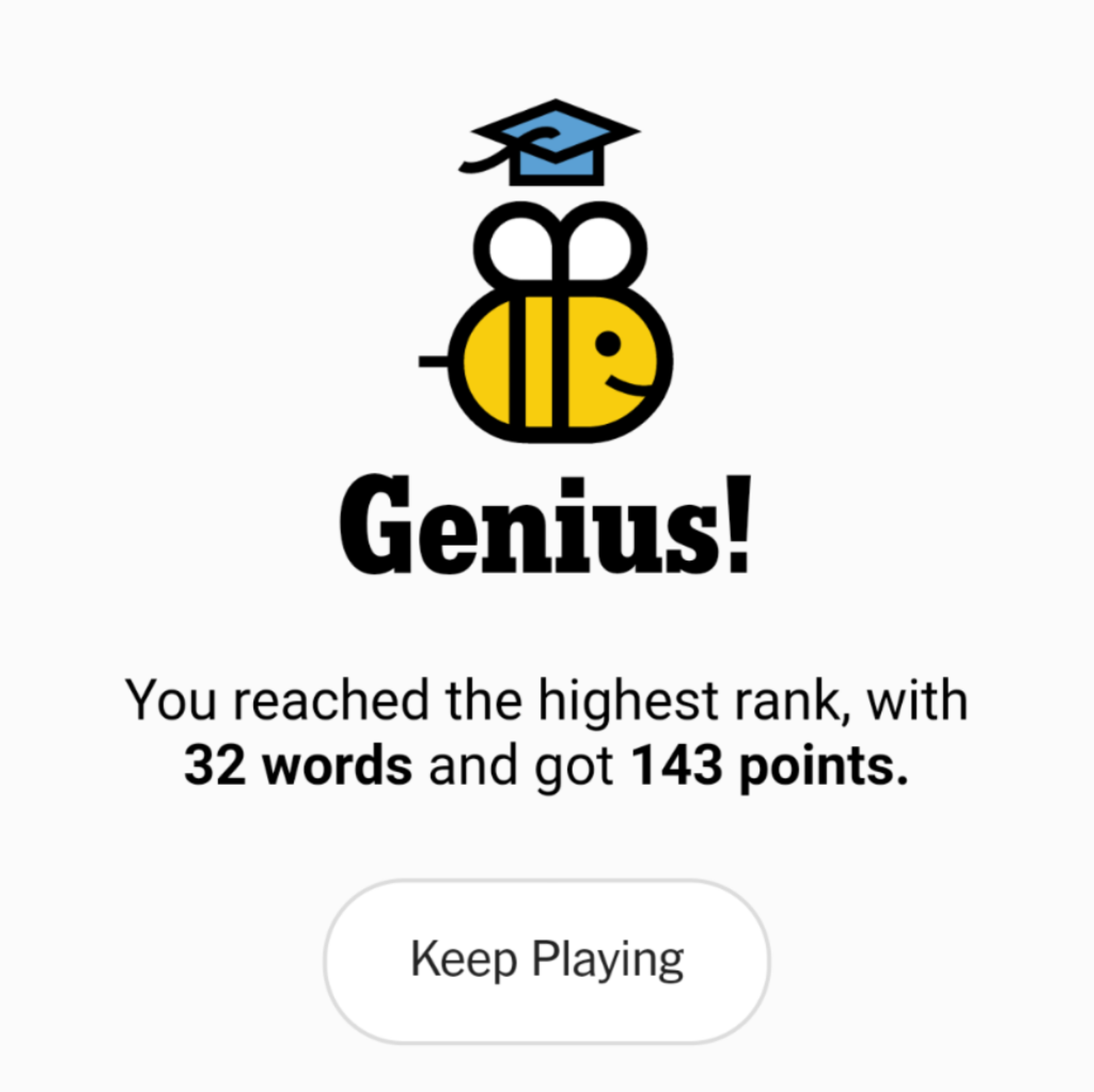 I tore through this one pretty fast, but I can’t seem to find any more words, so I took some time to edit a photo for the first in a short series on haircut posts.

Unfortunately, the Pokémon WEEDLE was not an acceptable word, and DEWED didn’t work, either. That second one is most certainly a real word. Get it together, NYT Spelling Bee.

Today I got pretty far beyond the minimum genius level, but according to my sister, I’m still far afield, so I’ll stop here. 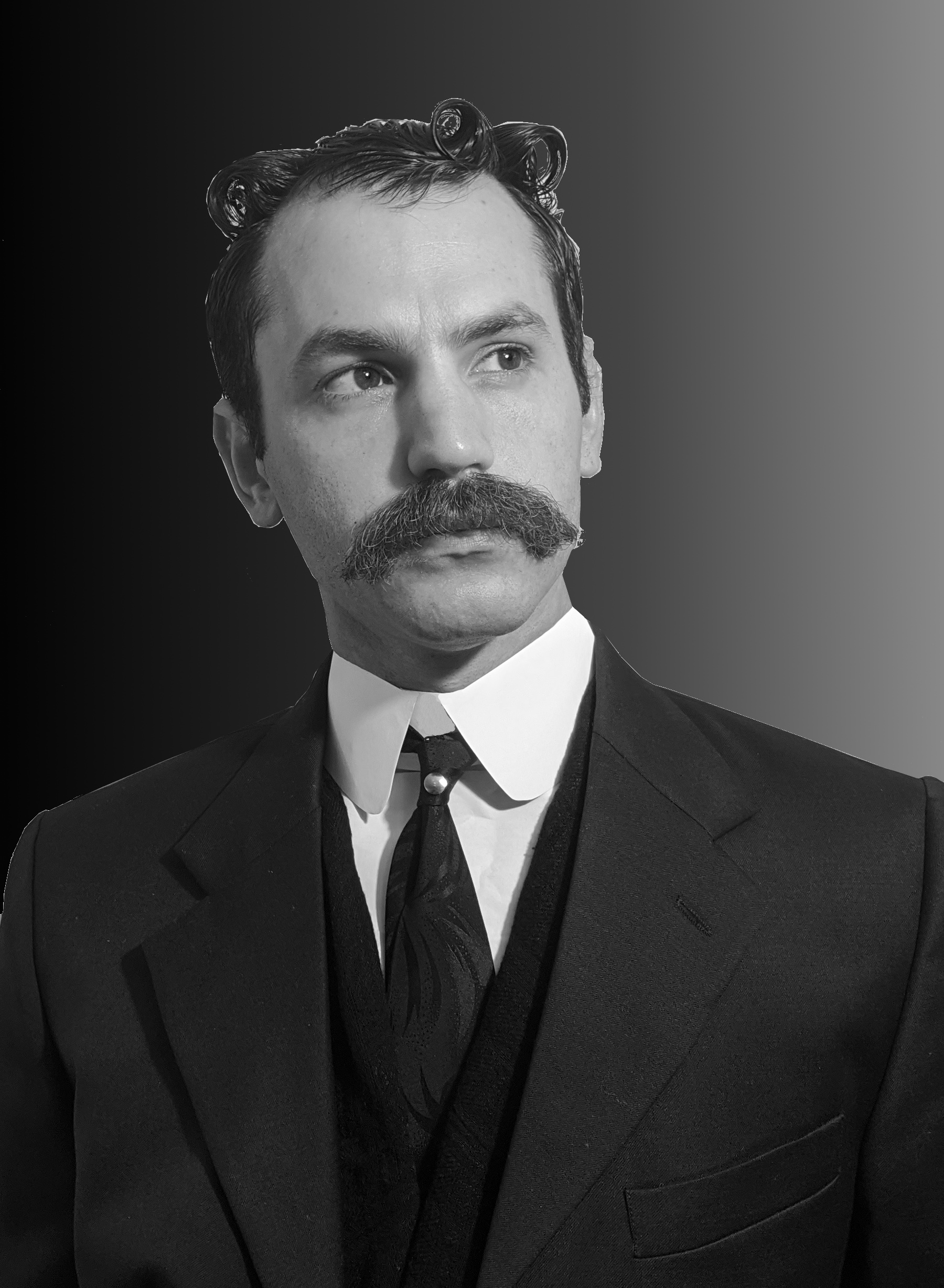 When lockdown/isolation started in California in March and salons were not considered an essential service–even in Beverly Hills(!)–the #longhairdontcare trend really took hold, as we all know.

By June, I was looking pretty shaggy. So much so that I finally got to try to re-create the picture of W. C. Davenport, taken by Elmer Chickering, given to me by my sister long ago.

My fiancee took the time to style me up like the old photo and then was patient with me as I tried to sit still without messing things up. I had grown out my mustache so long that it was starting to have split ends. I probably was doing something wrong, but that’s how it goes.

I don’t know these people. If anyone knows this Eleanore Davenport or W.C. Davenport, please send an email to WhoIsWCDavenport@raabidfun.com.

The result of that June afternoon’s work, side-by-side with the original:

It wasn’t until the end of the month that she first cut my hair. And then yesterday I cut hers. Stay tuned. 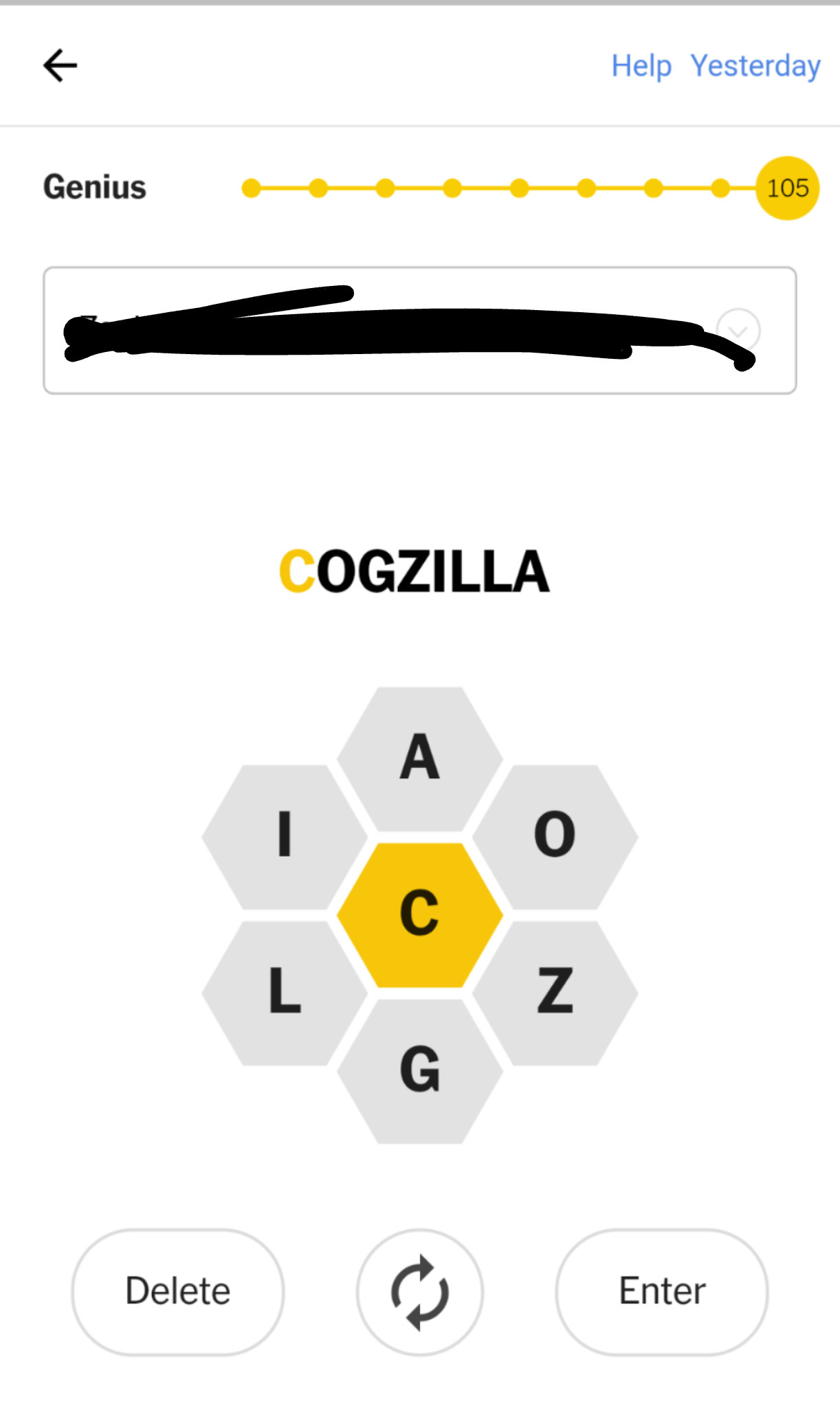 I’ve gotten to the genius level for today’s puzzle, but there’s more to go. Today I’m starting the breakdown of what I missed the day before. That way maybe I’ll start to get those words, too.

APORT: on the left side of a ship Makes sense. Shouldn’t miss this one again.
APPARAT: The administrative system of a communist party, especially in a communist country. I should get used to this word if Trump wins again.
ARHAT: (in Buddhism and Jainism) someone who has attained the goal of the religious life. I probably will miss this one again.
ATTAR: rose petal perfume. I may miss this one again, but I don’t know.
HATHA: This does not exist as a standalone word, so shenanigans.
HORTATORY: I hadn’t heard this word before, but the etymology is interesting, so here it is:

OATY: What it sounds like. This one is on me for sure.
PARATROOP:

PORTRAY: Yup. My bad.
RAPPORT: Dang.
RATTRAP: And I make fun of restaurants with C’s in the windows!
ROTATORY: I hadn’t known this word wouldn’t receive a red squiggly.
TAPA: The food. I don’t think I’ve ever had tapas. But asking if someone wants to go to a tapas bar with you can get you into trouble if not heard correctly.
TARTAR: “I got so much tartar, I don’t gotta dip my fish sticks in shit!” -Mitch Hedberg z”l
TROTH: The etymology (now obviously) is truth. I have no familiarity with this word.


So there’s a lot to improve upon. I didn’t go much beyond genius level today, so there will be a list tomorrow, too. 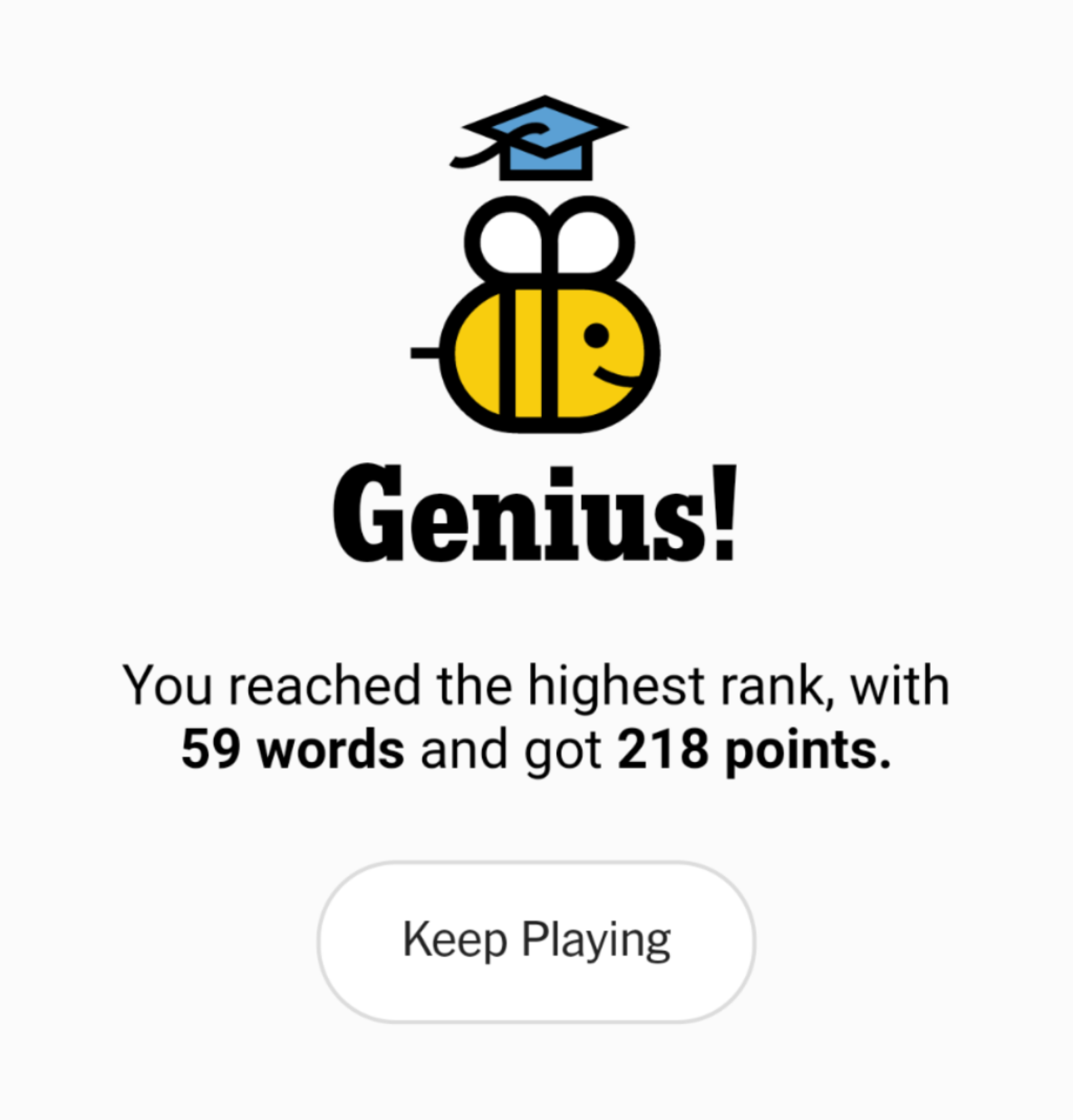 I beat the buzzer with this one. It was funny because my heart was pounding as I got close to the deadline. I had been playing the new Rocket League with a buddy, and midnight was coming up quick.

So that I got AORTA as the word that pushed me over was fitting.

Still disappointed that PORTAPOTTY was not a valid word in this puzzle.

Next one about to start.